Why We Made The Switch From Sketch to Figma

In the spring of 2021, I made my case for our company to switch from Sketch to Figma. Previous designers had worked in Sketch for several years and had a lot of assets built. Sketch is a high-quality tool for UI design, so why was it worth it? Several reasons went into the decision, which I’ll detail below. I’ll also tell you how it’s going.

Designers who used to work with Snapsheet before I joined had worked in Sketch. By the time I came on board, the program had not been used for almost a year. Designs had atrophied. The tech stack was version-controlled using Abstract, hand-off to developers was done using Abstract and InVision, and any prototyping was done in Sketch or InVision. 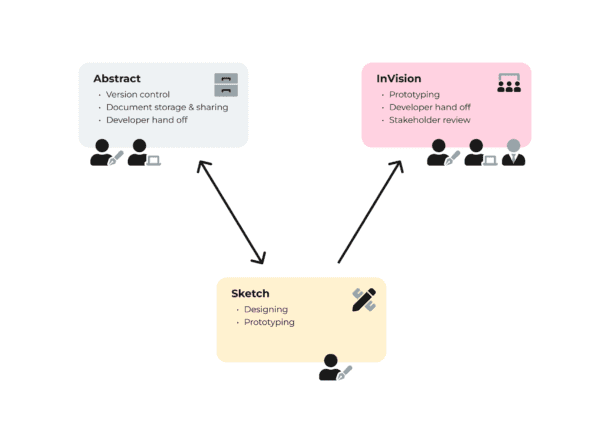 There were already existing processes and assets in place, and I was just as comfortable using Sketch as Figma—so what led me to consider the switch? I encountered my first problem while using Abstract’s version control. I mentioned that there was atrophy of the assets, which included the design library. As the only designer, I needed to get up to speed quickly and make a lot of updates, and I needed those updates to be in a reusable library.

It was inefficient to continue checking files in and out of Abstract for every minor update I needed, especially when I was the only designer. Ultimately, I didn’t need the level of control that Abstract offered. The simpler versioning found in Figma was more than sufficient, and the speed of updating and publishing the design library was vastly improved. 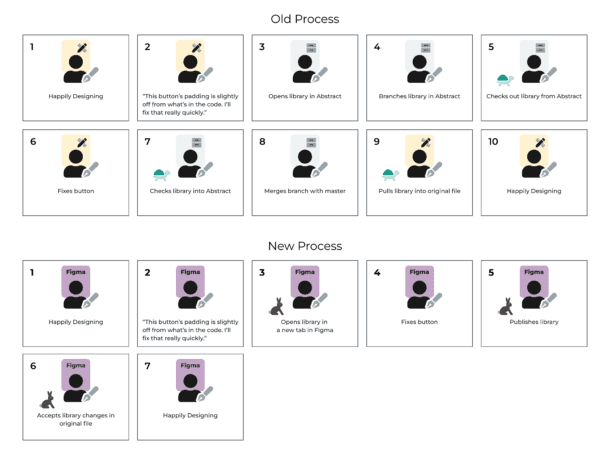 The next problem area I came across centered around prototyping. There were a few issues here, and the first was sharing prototypes. I think Sketch has improved this capability since, but at the time, you could not easily share your prototypes with people outside the Sketch app.

With Figma, you could easily give people a link, and they immediately had access to your prototype. Being able to share prototypes was critical for communicating interactions with developers and also for conducting usability tests with our users. I was technically able to get around this issue with Sketch by using InVision for prototyping, but it’s a bit cumbersome having to push your changes to InVision continuously. Not to mention that your prototype can easily break if your design changes.

In addition, you now have two places serving as your source of truth: Sketch and InVision.

With Figma, the prototype and the mockups didn’t need to be separate. They could be one and the same, which would save time and help keep both up to date. The cherry on top of the advantages I already mentioned was that Figma had more robust micro interaction capabilities. It would be incredibly nice to be able to use smart animation or prototype things like horizontal scrolling if needed.

Some additional considerations led to my final decision. First, similar to prototype sharing, developers could log into the Figma web app and immediately inspect the designs. I would not need to pass along InVision links and ensure they were up to date. Developers also would not need to download any new software. Second, I found Figma’s collaborative functionality to be the best I’d experienced. It was seamless to work on the same file with another designer. Figma’s license structure was also affordable and scalable. Those things meant it would work well as my design team grew. Finally, I found Figma’s design components to be the most intuitive.

Did I consider any other tools when I decided to switch?

I did. The three I had previous experience with were Sketch, Figma, and Adobe XD. I rejected Adobe XD fairly quickly based on my previous work with it. At the time, it had less mockup functionality than either Sketch or Figma and would also not reduce my tech stack. I was tempted by the robust prototyping capabilities that Axure has. However, I had not used it before, and my understanding based on reviews was that it has a steep learning curve and would be weaker for UI design. While I love prototyping, I knew that a large need for us was making high-fidelity mockups and having a robust design system. This need meant that skimping on UI functionality was a non-starter. Also, while the advanced prototyping capabilities would have been fun and nice, they were not critical. I knew the prototyping within Figma would be sufficient for most of our uses.

So how’s it going now?

I’m honestly incredibly happy we made the switch. I could work much faster right out of the gate, and I’ve been able to iterate on our design library easily. The developers have moved over to Figma easily, allowing me to keep all the design assets in one location. We are now growing our design team, and I’m grateful for the easy collaboration and library sharing. Some of the best parts of the switch were things that I didn’t even foresee at the time: the new functionality that Figma has released in the last year and a half. Figma has continued to make my job easier and more enjoyable by releasing interactive components, component variants, and a million other minor changes that make designs more reusable and help me design in a way that matches how code works. Making the switch has undoubtedly been worth the effort, and I hope that Figma will keep on its trajectory of releasing functionality that truly answers the needs of UX/UI designers.